SDCC 2014 – THE HOBBIT: THE BATTLE OF THE FIVE ARMIES Panel Recap

Moderated by Stephen Colbert, the Hobbit: The Battle of The Five Armies was one of the real highlights of this year’s con.

It’s hard to believe that The Hobbit: The Battle Of The Five Armies is the 6th film in the Tolkien movie saga that has been shepherded by Peter Jackson. Now that we’ve reached the end, Peter Jackson and the cast of the film were back at Comic Con today to not only talk about the movie, but to look back on the whole series of movies that have all become classics. 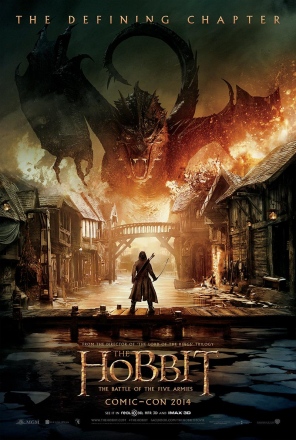 To start off the celebration, they screened a big video recap of the whole saga that included footage from all of the films. Then, Stephen Colbert hopped onto stage, in the same costume he wore in The Hobbit: Desolation of Smaug and then read a speech he had prepared about his initial skepticism on learning Tolkien’s work was heading to film, and even bigger skepticism at learning Peter Jackson was going to be behind the helm.

The footage screened included outtakes and bloopers from all the movies that had never been released before. The highlight was most definitely Gandalf’s strip tease. Then of course, there was the first trailer for The Battle of The Five Armies. If the trailer is any indication, fans who felt let down by the last two films will definitely feel a lot happier about this one.

During the panel, Jackson said that they are still working on editing as well as motion capture and animation for the movie’s big action scene.

Benedict Cumberbatch made a similar statement to one he said in the Penguins of Madagascar panel, in that he said he’d had a scene with Kate Blanchett, but they never actually met face to face during the movie’s production.

Conversely, Blanchett said how great it was to get to share screen time with Sir Ian McKellen, as they never got to do any scenes together during LOTR.

He also talked about how his job was easier than his co-stars in some ways, as they had to act against a tennis ball and he was just: “throwing myself around a carpeted floor like a lunatic.”

Kate Blanchett told the audience that there will be a point in the new film where we can expect to see her character, Galadriel, “lose her shit.”

Jackson also talked about the tone of films and said that they were a progression towards the more dramatic tone that we all saw in the original LOTR trilogy and that we can expect good amounts of death and tragedy in the new film.

Most of the cast talked about their love of the original books and how they impacted their childhoods.

One of the more touching moments was when Andy Serkis talked about how meeting Peter and his wife changed his life, and that when they asked him to be King Kong, he knew: “It’s anti-typecasting in a way—I can play anything!”