In a world of superheros, Fox’s “The Maze Runner” took center stage today in Hall H at SDCC.

In a world of superheros, Fox’s “The Maze Runner” took center stage today in Hall H at SDCC. Based on the novel by James Dashner, they story revolves around a mysterious maze and a group of teenagers who awake to find themselves with no memory trapped in… you guessed it, said maze.

At the panel was Dashner himself, along with director Wes Ball, and actors Dylan O’Brien, Will Poulter, and Kaya Scodelario. According to Dashner, the film is a faithful adaption of his novel, “They took the vision of my book and turned it into this magnificent film.” He will also have a cameo in the film. And as long as it does well, its sequel “The Scorch Trials” will happen which might begin filming this fall or winter.

We were shown some footage of the film which showed Dylan O’Brien’s character in a cage being brought to the surface (It’s similar to the teaser that was released awhile back). Once he’s released, he tried to flee only to realize that he’s trapped in a giant maze. Another clip revealed a Griever attack on Thomas. We’re given our first look of the creature design which is a blend of cybernetic and organic incest parts.

Overall, “The Maze Runner” seems impressive and will continue to push the boundaries of teen flicks (we’ve really come a long way since “Twilight”). The full trailer should be online soon, we’ll update this post when it hits. 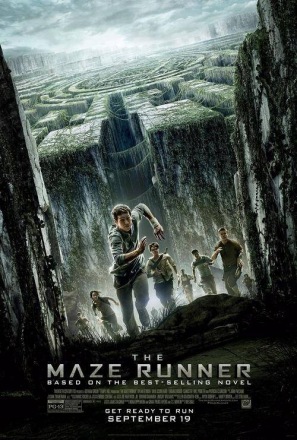