One of the interesting things we’ve noticed while rewatching the surreal “Batman v Superman: Dawn of Justice” trailer is the Easter egg of what appears to be a defaced Jason Todd Robin costume.

Spotted at the 2:00-2:02 mark in the new trailer, you can see Bruce Wayne (Ben Affleck) in what appears to be the Batcave, walking by a costume encased in glass defaced with “HA-HA! Jokes on you Batman,” which was undoubtly tagged by the Joker. If you look closely, you are able to see a stylized “R” symbol on the armed costume and a black domino mask.

It looks like it’s trying to recreate the iconic Jason Todd memorial from the Batman comics which honors the “late” Jason Todd, AKA the second Robin, who was killed by the Joker. 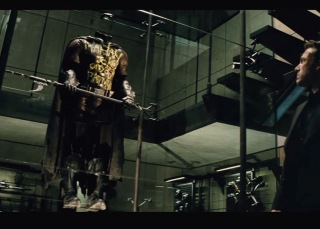 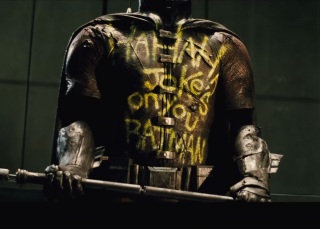 Batman v Superman: Dawn of Justice is set to open worldwide on March 25, 2016.