20th Century Fox has released a new trailer and poster for their upcoming CGI film “Rio.” 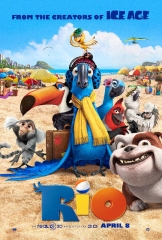 20th Century Fox has released a new trailer and poster for their upcoming CGI film “Rio.” Made by the same folks who brought us “Ice Age,” the film is set in the city of Rio de Janerio and follows the tale of Blu, a rare macaw who thinks he’s the last of his kind.

Here’s the official synopsis:
RIO is a 3-D animation feature from the makers of the “Ice Age” films. Set in the magnificent city of Rio de Janeiro and the lush rainforest of Brazil, the comedy-adventure centers on Blu, a rare macaw who thinks he is the last of his kind. When Blu discovers there’s another – and that she’s a she – he leaves the comforts of his cage in small town Minnesota and heads to Rio. But it’s far from love at first sight between the domesticated and flight-challenged Blu and the fiercely independent, high-flying female, Jewel. Unexpectedly thrown together, they embark on an adventure of a lifetime, where they learn about friendship, love, courage, and being open to life’s many wonders. RIO brings together a menagerie of vivid characters, a heart-warming story, colorful backdrops, energizing Latin and contemporary music, and family-friendly song and dance.

“Rio” will open in theaters on April 8th, 2011 and it looks like it’ll be as fun, if not more colorful than “Ice Age.” Check out the trailer and let us know what you think!