Jack McClane is a bad ass, but it looks like Jack McClane might even be a bigger bad ass.

Jack McClane is a bad ass, but it looks like Jack McClane might even be a bigger bad ass. Filming is set to begin shortly on the fifth installment of the Die Hard series and this time, Jack’s son will be joining the fray. Now, we are just getting word that Spratacus’ Jai Courtney has landed the role as the estranged McClane. The Two will pair up to fight trouble in Russia and I’m guessing that Bruce Willis’ character will probably die in the end so that Courtney can take over the franchise. I for one am just happy that Justin Long won’t be trying his luck as an action star again.

Here’s a pic from Courtney’s and Willis’ screen test: 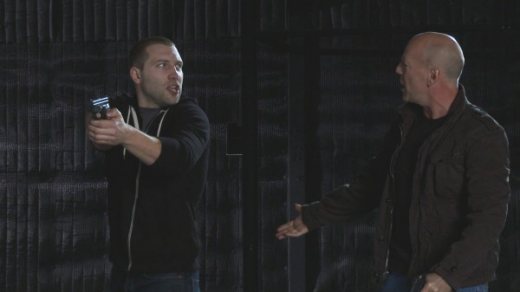 A GOOD DAY TO DIE HARD puts McClane on an international stage — truly a NYC fish out of water in Moscow — and introduces his estranged son Jack. An apple that has not fallen far from the tree, Jack may even be more of a hardass than his father. Despite their differences, they must work together to keep each other alive – and the world safe for democracy.

The film begins production this April, for a February 14, 2013 release.

Courtney, studied drama at the Western Australian Academy of Performing Arts (WAAPA), where he graduated in 2008. Following graduation Courtney quickly landed guest star roles on two hit Australian shows, Packed To the Rafters followed by All Saints. Later that year, Courtney won a Theatre Critics Award as Best Newcomer for his performance in The Turning for the Perth Theatre Company. In 2009 he landed the role of Varro in the international television hit, Spartacus: Blood and Sand. Fans of the show created an uproar over Varro’s death and to this day continue to lament about it on the many Spartacus fan sites and blogs. Last year, Courtney landed a starring role opposite Tom Cruise in One Shot, directed by Christopher McQuarrie.