Star Wars: Secrets Of The Empire is slated to open at Disney Springs this holiday season.

If you’ve ever wanted to check out a Disney Star Wars attraction, but don’t have the $110 dollars it takes to get into the park, Disney has just unveiled a new attraction coming to Disney Springs this holiday season.

The new attraction has been developed by Lucasfilm, ILMxLAB, and THE VOID and will supposedly allow fans a chance to be fully immersed in a multi-sensory experience where they can interact with friends and other Star Wars characters. While we don’t have any story details about the attraction as of yet, the concept art photo includes an image of K-2SO, which makes us think that it will take place between the events of Revenge of The Sith and A New Hope. 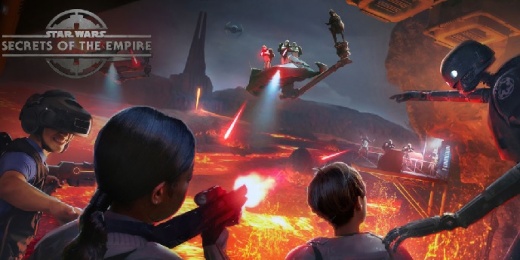 “At THE VOID, we combine the magic of illusions, advanced technology and virtual reality to create fully immersive social experiences that take guests to new worlds,” said Curtis Hickman, co-founder and chief creative officer at THE VOID. “A truly transformative experience is so much more than what you see with your eyes; it’s what you hear, feel, touch, and even smell. Through the power of THE VOID, guests who step into Star Wars: Secrets of the Empire won’t just see this world, they’ll know that they are part of this amazing story.”

“At ILMxLAB, we want people to step inside the worlds of our stories,” explained Vicki Dobbs Beck, executive in charge of ILMxLAB. “Through our collaboration with THE VOID, we can make this happen as guests become active participants in an unfolding Star Wars adventure. By combining Lucasfilm’s storytelling expertise with cutting-edge imagery, and immersive sound from the team at Skywalker Sound, while invoking all the senses, we hope to truly transport all those who experience Star Wars: Secrets of the Empire to a galaxy far, far away.”