And also check out Ren ont he cover of Entertainment Weekly inside!

While we’ve heard a lot about the upcoming Star Wars film, The Force Awakens, there is still a lot of mystery surrounding the film’s bad guy, Kylo Ren. In a new interview, JJ Abrams is finally opening up a little about the character and some of the inspiration behind both his mask and his controversial cross bar light saber.

In regards to the mask, here’s what JJ had to say:

“The movie explains the origins of the mask and where it’s from, but the design was meant to be a nod to the Vader mask. Ren is well aware of what’s come before, and that’s very much a part of the story of the film.”

Meanwhile, in discussing his light saber, Abrams revealed that Ren is not part of some First Order Pedigree, but is in fact something darker and more chaotic.

“The lightsaber is something that he built himself, and is as dangerous and as fierce and as ragged as the character.”

While it’s very exciting to see Adam Driver’s Kylo Ren as the bad guy, I’m really hoping that they don’t pull a Maul and make him a one shot villain. I’m really hoping that he gets to evolve through the entire trilogy like Darth Vader before him. I’m also very interested to see the dynamic between his character and Domhnall Gleeson’s General Hux. 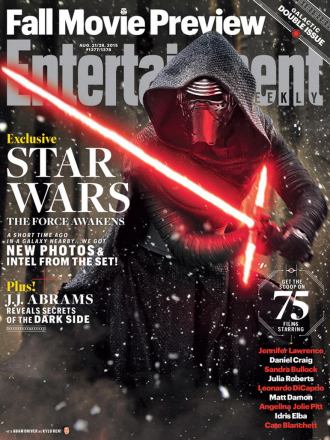