WB has released some new information about the upcoming Green Lantern video game that will accompany the release of live-action “The Green Lantern” film. 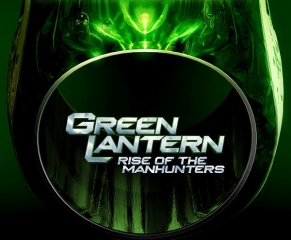 Warner Bros. has released some new information about the upcoming Green Lantern video game that will accompany the release of live-action “The Green Lantern” film. Green Lantern: Rise of the Manhunters , will be a stand alone multi-platform game that features teh voice and likeness of Ryan Reynolds. It’s tentatively set for a June 1st release.

Here is what Warner Bros. had to say about the game’s storyline:
“An android race, originally created by the Guardians of the Universe to serve as the first interstellar police force. The Manhunters became more obsessed with administering punishment than serving justice, forcing the Guardians to dissolve their ranks. The few Manhunters that survived fled into exile and the Guardians founded a new elite police force called the Green Lantern Corps and armed its members with specially crafted power rings. Now the Manhunters are back and out for revenge, readying their forces for a war against the Guardians and the Green Lantern Corps. Faced with destruction, the Corps is looking to you as the newest recruit, gifted but cocky test pilot Hal Jordon, to protect peace and preserve justice.”

In the game, players will have the chance to master the Green Lantern ring, play as Hal Jordan or Sinestro do do battle across the universe:

– Master the Ring: Wield the Green Lantern Power Ring to create a spectacular range of “hard-light” constructs including a gatling gun, giant fists, and much more, all of which can be linked together to form an endless number of combinations.

– Stand Together: Join forces with a friend to play as Hal Jordan or Sinestro to battle the Manhunters, with the ability to drop in or out at will.

– Take Flight: Dodge, blast, and destroy legions of enemies as you soar across the universe in battles of intergalactic scope.

“Green Lantern: Rise Of The Manhunters” is being developed by Double Helix and will be released for PlayStation 3, Xbox 360, Wii, and Nintendo DS.