Glau will play a cute intrepid investigative blogger who goes after dirty cops and costumed bad guys. Oh, and she will kick a lot of ass.

Every geeks’ favorite darling Summer Glau still hasn’t jumped off the sci-fi bandwagon despite appearing in three failed sci-fi series (Firefly, Terminator: The Sarah Connor Chronicles, Dollhouse). In fact, she’s returning for more, and has recently been cast in the lead role for NBC’s upcoming superhero pilot “The Cape.”

Directed by Simon West the story follows a former police officer (David Lyons) who creates a masked alter-ego aka The Cape, to clear himself of a crime he didn’t commit. Glau will play a cute intrepid investigative blogger who goes after dirty cops and costumed bad guys. But don’t worry, she won’t just be a simple pencil pusher (or typist I should say!). Glau is expected to also kick major ass.

More on “The Cape” as it develops. 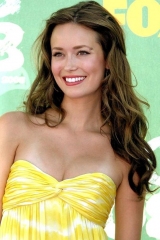