Ducky is now the most dangerous man in Supergirl’s corner of the Arrowverse.

When Supergirl first announced that Two and a Half Men/ Superman 4 actor Jon Cryer would be joining the show as Lex Luthor, it seemed like a really weird idea. Honestly, it still does, but it is happening and we got our first look at him in character today. If you are wondering whether Cryer shaved his head for the role, the answer is actually no. He’s appeared in a few other shows over the last couple of years (NCIS most notably) and he’s been bald in all of them.

We’ll be seeing his first appearance as Luthor in the upcoming Supergirl episode, ‘Oh Brother Where Art Thou’ sometime in March. In it, Lex will reach out to Lena Luthor from prison to try and get her back on his side, no matter who he has to threaten to kill to make it happen.

Supergirl producers Robert Rovner and Jessica Queller had this to say about the addition to the cast:
“We’re beyond excited to introduce iconic villain, Lex Luthor, to Supergirl and to weave him into our story this season. We’ve talked about having Lex on the show since it’s inception and we’re excited to have him finally arrive. We can’t wait for him to shake things up in National City and watch him go toe to toe with not only Supergirl, but his sister Lena Luthor (Katie McGrath).” 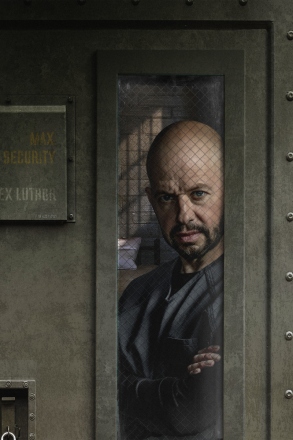