The show, Heroes of Cosplay will follow a different cosplay celeb each week to find out what it takes to be them and to make the amazing costumes that shy guys love to hover-hand during photos.

This August, Syfy is going to premier a 6 part series thatr delves behind the scenes of some of the world’s greatest cosplayers. The show, Heroes of Cosplay will follow a different cosplay celeb each week to find out what it takes to be them and to make the amazing costumes that shy guys love to hover-hand during photos. 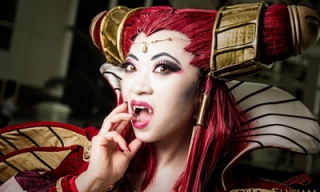 Here’s a list of the cosplayers involved in the new series:
Yaya Han – Yaya is one of the acknowledged legends of cosplay whose entrance at each convention – always in full costume – never fails to create a stir. A source of inspiration and intimidation to the contestants, Atlanta-based Yaya Han is often a judge at contests.

Riki LeCotey – Riki moved from rural Canada to the United States to follow her passion for cosplay. A special effects technician on sci-fi films, she is also the founder of Cosplay for a Cause, which has raised money for victims of the Japanese Tsunami.

Monika Lee – Monika is from Atlanta and a student at the Georgia Institute of technology, where she’s majoring in industrial design. A cosplayer since the age of 13, competed in numerous craftsmanship contests winning several “Best in Shows” and various other awards.

Victoria Schmidt – Victoria is co-founder of the geek fashion and style blog settostunning.com. A passionate fan of cosplay since high school, she’s especially proud of being Princess Leia on LucasFilm’s Star Wars float in the 2007 Rose Parade.

Chloe Dykstra – Chloe was almost fated to be in the cosplay community; her father is an F/X legend, having worked on the original Star Wars and Star Trek films. An actress and model, she hosts the Just Cos show on YouTube’s Nerdist channel.

Jessica Merizan and Holly Conrad – Jessica has performed in regional theater in Southern California since she was five years old. Together, she and fellow cast member Holly Conrad co-founded a costume fabrication shop, cosplay community and new media entertainment company. Holly was mentored by her very qualified grandfather, Dorse Lanpher, an F/X animator for Disney and others. She now works in the special effects business for several major studios, in addition to her business with Jessica.

Becky Young – Becky has created costumes since attending San Diego Comic-Con in 2006. A trained actress, she has voiced Video Game Nussie on Maxim Radio and was a judge on CBS Sports’ Guitar Hero Competiton show. She lives in Burbank.

Jesse Lagers – Jesse lives in Portland, Oregon, where he works as a software systems administrator. He hopes that success in cosplay competitions will lead to his own business creating costumes and props. Jesse is a stickler for realism and authenticity in all of the costumes he creates.