This will be Smith’s first horror film and it’s set to premiere at The Sundance Film festival, where its rights will be auctioned off. 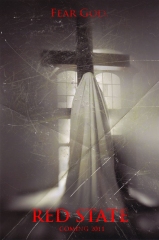 Here’s your first look at Kevin Smith’s new horror film “Red State.” This will be Smith’s first horror film and it’s set to premiere at The Sundance Film festival, where its rights will be auctioned off. The story revolves around three high school teens who reply to an online ad from an older woman looking for a gang bang. Of course, with this being a horror, things aren’t what they seem.

Here’s the official film synopsis:
Ever since Clerks (cowinner of the Filmmakers Trophy at the 1994 Sundance Film Festival), Kevin Smith has been known for his sharp, subversive, comedic writing. He shifts from comedy to horror with Red State and aptly demonstrates that good writing transcends genre.

Instead of relying on archetypes and predictable formulas, Smith meticulously fashions all-too-real characters, utilizing exceptional performances (notably by Michael Parks) and an intelligent script. His realistic style gives the film an intimate feeling, heightening the terror to biblical proportions. Red State is a shocking new kind of horror film that aggressively confronts higher powers and extreme doctrines with a vengeance.