Terminator: SCC May Be Over, But Glau Is Forever

I have never been too emotionally invested in many shows (Firefly, Freaks & Geeks), and to be honest I never expected to like Terminator: SCC… 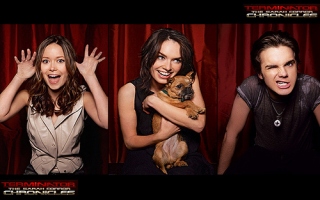 Airing last night, episode 29, “Born to Run,” is quite possibly the last and final episode of “Terminator: The Sarah Connor Chronicles.” Although Fox has not officially released any statements regarding a season 3 or its cancellation, all likely hood points the later.

You can sign online petition, write letters, and curse Fox all you want, but the fact remains — “Terminator: The Sarah Connor Chronicles” had terrible ratings. And like every show with terrible ratings, which doesn’t put money in Fox’s already deep pockets, they get discarded for the next potential hit.

Just by watching the final episode, which was crammed packed with at least three or four episodes worth of material, it’s clear that Josh Friedman and crew have already accepted the inevitable and have done their best to tie up loose strings and to change the status quo of the show forever. So even if Fox orders a season 3, all likelihood points to the fact that it cannot be made because too much has changed.

I have never been too emotionally invested in many shows (Firefly, Freaks & Geeks), and to be honest I never expected to like Terminator: SCC. In fact, I even dropped it after the first episode and it wasn’t until boredom and free time that I picked it up again a few episodes in. But the more I watched, the more involved I became with not just the story but the characters and the universe. I am not afraid to admit that I am sad knowing that this great show has now come to an end, but I am willing to accept that as a fact and look forward with great anticipation to future projects all those involved in T:SCC will soon be in.

And with that I leave you all this (because really, who didn’t watch T:SCC JUST for Glau?):