This is quite possibly the most eloquent and genuine defense of super hero films that iI’ve ever had the pleasure of reading.

This is quite possibly the most eloquent and genuine defense of super hero films that iI’ve ever had the pleasure of reading. As much as we love our comic book movies, there is still a large chunk of both moviegoers and actors who look down upon them as mindless nerd fare or spandex bubblegum. With The Avengers set to premier in The UK next friday, the film’s villain, Tom Hiddleston (Loki), has penned an amazing editorial for the Guardian that blew us all away. If you (or your spouse/gf/ whatever) is still on the fence. Just tell them to sit down, shut up for a minute and read this. 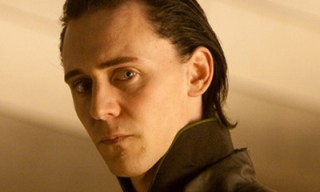 Reprinted From The UK Guardian:

Earlier this year, beneath the wind-whipped tarpaulin of a catering tent in Gloucester, I was working on a film with the actor Malcolm Sinclair. Over scrambled eggs at an ungodly hour, he told me something I had not previously known: when Christopher Reeve was young, barely out of Juilliard, he was roundly mocked by his peers on Broadway for accepting the role of Superman. It was considered an ignoble thing for a classical actor to do.

I grew up watching Superman. As a child, when I first learned to dive into a swimming pool, I wasn’t diving, I was flying, like Superman. I used to dream of rescuing a girl I had a crush on (my Lois Lane) from a playground bully (General Zod). Reeve, to my mind, was the first real superhero.

Since then some of the greatest actors have turned superheroes into a serious business: Michael Keaton and Jack Nicholson in Batman; Ian McKellen and Patrick Stewart, the first venerable knights of the X-Men, who have now passed the baton to Michael Fassbender and James McAvoy. In spite of 20 years of mercurial work in the likes of Chaplin and Kiss Kiss Bang Bang, it was his rock-star-charismatic yet somehow humble Tony Stark in Iron Man that helped wider audiences finally embrace the enormous talent of Robert Downey Jr. And Heath Ledger’s performance in The Dark Knight quite simply changed the game. He raised the bar not just for actors in superhero films, but young actors everywhere; for me. His performance was dark, anarchic, dizzying, free, and totally, thrillingly, dangerous.

Actors in any capacity, artists of any stripe, are inspired by their curiosity, by their desire to explore all quarters of life, in light and in dark, and reflect what they find in their work. Artists instinctively want to reflect humanity, their own and each other’s, in all its intermittent virtue and vitality, frailty and fallibility.

I have never been more inspired than when I watched Harold Pinter speak in a direct address to camera in his Nobel lecture in 2005. “Truth in drama is forever elusive. You never quite find it but the search for it is compulsive. The search is clearly what drives the endeavour. The search is your task. More often than not you stumble upon the truth in the dark, colliding with it or just glimpsing an image or a shape which seems to correspond with the truth, often without realising that you have done so. But the real truth is that there never is any such thing as one truth to be found in dramatic art. There are many. These truths challenge each other, recoil from each other, reflect each other, ignore each other, tease each other, are blind to each other. Some times you feel you have the truth of a moment in your hand, then it slips through your fingers and is lost.”

Big talk for someone in a silly superhero film, I hear you say. But superhero films offer a shared, faithless, modern mythology, through which these truths can be explored. In our increasingly secular society, with so many disparate gods and different faiths, superhero films present a unique canvas upon which our shared hopes, dreams and apocalyptic nightmares can be projected and played out. Ancient societies had anthropomorphic gods: a huge pantheon expanding into centuries of dynastic drama; fathers and sons, martyred heroes, star-crossed lovers, the deaths of kings – stories that taught us of the danger of hubris and the primacy of humility. It’s the everyday stuff of every man’s life, and we love it. It sounds cliched, but superheroes can be lonely, vain, arrogant and proud. Often they overcome these human frailties for the greater good. The possibility of redemption is right around the corner, but we have to earn it.

The Hulk is the perfect metaphor for our fear of anger; its destructive consequences, its consuming fire. There’s not a soul on this earth who hasn’t wanted to “Hulk smash” something in their lives. And when the heat of rage cools, all that we are left with is shame and regret. Bruce Banner, the Hulk’s humble alter ego, is as appalled by his anger as we are. That other superhero Bruce – Wayne – is the superhero-Hamlet: a brooding soul, misunderstood, alone, for ever condemned to avenge the unjust murder of his parents. Captain America is a poster boy for martial heroism in military combat: the natural leader, the war hero. Spider-Man is the eternal adolescent – Peter Parker’s arachnid counterpart is an embodiment of his best-kept secret – his independent thought and power.

Superhero movies also represent the pinnacle of cinema as “motion picture”. I’d like to think that the Lumière brothers would thrill at the cat-and-mouse chase through the netherworld streets of Gotham in The Dark Knight, with helicopters tripping on high-tensile wires and falling from the sky, and a huge Joker-driven triple-length truck upending 180 degrees like a Russian acrobat. I hope that they would cheer and delight at the rollercoaster ride through the skies of Manhattan at the end of Avengers Assemble. These scenes are the result of a creative engine set in motion when the Lumières shot L’Arrivée d’un Train en Gare de la Ciotat in 1895. The trains just move a lot faster these days. And not just trains; trucks, bikes, bat-mobiles and men in flying, shining iron suits. The spectacle is part of the fun – part of the art, part of our shared joy.

How far I hope we have come since the judgment of Christopher Reeve’s peers. Maybe playing superheroes isn’t such an ignoble undertaking after all. “I still believe in heroes,” says Samuel L Jackson’s Nick Fury in Avengers Assemble. So do I, sir. So do I.