The FANTASTIC FOUR’s Thing Has No Thing!

No wonder he wants to clobber everyone.

A new picture has leaked of Ben Grimm’s The Thing from the upcoming Josh Trank helmed Fantasti Four Reboot. The image of a statue of the character seems to be missing two very important things.

First, you may notice that The Thing is not wearing any pants. That leads us to the next revelation. The Thing has no dick! Man, no wonder he wants to clobber everyone.

Does this mean that The Thing has no digestive or reproductive tract? Does he need to eat? Are the sensors so puritanical that they think we still live in a world where fictional character have to be Ken Doll smooth? Did the CGI budget not have enough room for some spandex? I guess we’ll just have to wait and see when the movie hits theaters this August. 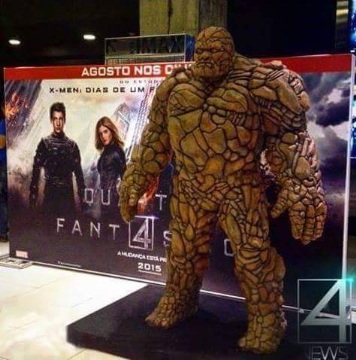 FANTASTIC FOUR, a contemporary re-imagining of Marvel’s original and longest-running superhero team, centers on four young outsiders who teleport to an alternate and dangerous universe, which alters their physical form in shocking ways. Their lives irrevocably upended, the team must learn to harness their daunting new abilities and work together to save Earth from a former friend turned enemy.