Wow, Johnny Depp actually sounds as ridiculous as Tonto as he looks with that dead bird on his head.

Last night, people watching the Tonight Show with Jay Leno got a chance to see Armie Hammer unveil the first trailer for the long suffering Disney Gore Verbinski Lone Ranger film starring Johnny Depp and Armie Hammer. It is really interesting that this film is even called The Lone Ranger as press for the film has me thinking it should be called Tonto and some Honkey. Seriously… even the first movie poster focuses on Tonto.

The film looks great visually… of course it does, Gore Verbinski Directed it. My only concern is that Wild Wild West looked cool in the trailers too.

Also, is Johnny Depp allowed to make a movie without Helena Bonham Carter anymore or does he have to always bring her along to stay in Tim Burton’s good graces?

Official Synopsis:
Native American spirit warrior Tonto recounts the untold tales that transformed John Reid, a man of the law, into a legend of justice. 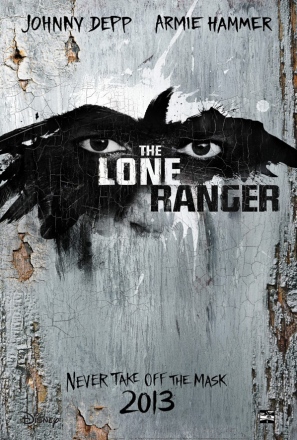