We all float down here…

If you were expecting the newest iteration of Pennywise, from the upcoming Andy Muschietti helmed remake of Stephen King’s, It to look like the Tim Curry version, you are in for a surprise. Entertainment weekly unveiled the new design today and it definitely looks a lot fancier and a lot more old timey. Oddly enough, this actually makes it a little less scary for me. 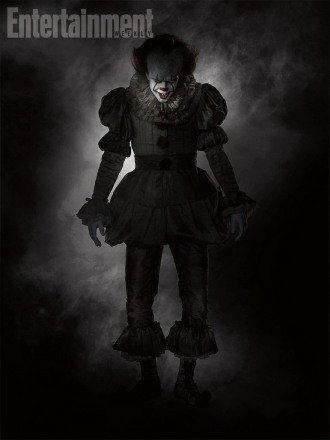 The new costume’s designer, Emmy-winning Janie Bryant gave the magazine some insight into her new take on the world’s most evil clown:

– The costumes takes inspiration from Medieval, Renaissance, Elizabethan, and Victorian eras.
“ The costume definitely incorporates all these otherworldly past lives, if you will. He is definitely a clown from a different time.”

– Every part of the costume aims to suggest something ancient and evoke something disturbing.

– “That pleating is actually Fortuny pleating, which gives it almost a crepe-like effect. It’s a different technique than what the Elizabethans would do. It’s more organic, it’s more sheer. It has a whimsical, floppy quality to it. It’s not a direct translation of a ruff or a whisk, which were two of the collars popular during the Elizabethan period.”

– “There is almost a doll-like quality to the costume. The pants being short, the high waistline of the jacket, and the fit of the costume is a very important element. It gives the character a child-like quality.”
The tight fit of the gloves are intended to make his hands appear porcelain.

– “If you look at the sleeves, there are the two puffs off the shoulder and biceps and again on the bloomers, I wanted it to have an organic, gourd or pumpkin kind of effect … It helps exaggerate certain parts of the body. The costume is very nipped in the waist and with the peplum and bloomers it has an expansive silhouette.”

– The design is aimed at creating a subliminal suggestion of an insectoid creature, something fans of the original movie might already be conjuring up.

– On the color scheme: “The pompoms are orange, and then with the trim around the cuffs and the ankles, it’s basically a ball fringe that’s a combination of orange, red, and cinnamon. It’s almost like Pennywise fades into his environment. But there are accents to pull out the definition of the gray silk … It makes him almost like a shadow.”

– The image itself also hints at Pennywise’s ability to fade into and out of his surroundings, since you might notice that he appears to be … floating.