Start your Monday off right by watching Michonne hack two zombies’ heads in half.

I had really planned on being more productive this weekend, but AMC had to go and run the entire Walking Dead series on Saturday and Sunday so… everything else kinda went in the can. Capping off the weekend were two great bonuses. First, they held a live ‘Talking Dead’ episode that included the first footage of Michonne doing what it is that Michonne does best – hacking zombies to death with a samurai sword. Then, fans were treated to a black and white version of the series pilot so that they could view it in a way fit along with the original comic book release. Ya. I called it a comic book, not a graphic novel.

While I loved watching Danai Gurira hack a couple of zombies in half at the mouth, there’s still some contention in at TBMW HQ about casting. I guess we’ll know how good she is when October rolls around. 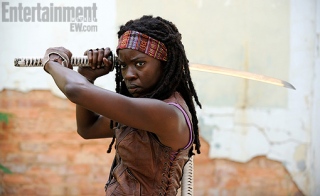