‘The Walking Dead’ – Lennie James Heading Over To Sister Series

Lennie James’ Morgan was one of the very first people that Rick encountered after he woke up in the pilot of The Walking Dead.

Lennie James’ Morgan was one of the very first people that Rick encountered after he woke up in the pilot of The Walking Dead. After popping up a couple of times in subsequent seasons, he’s become a major part of the team over the last couple of years. Now it looks like he’ll be saying goodbye to the east coast survivors and traveling back in time to join up with the west coast survivors on Fear The Walking Dead.

As for how his time on the original show is going to end, no one can say, but you’d have to imagine that he’s probably going to die. There’s also no current explanation on how Morgan traveled the great distance between coasts during his angry walk about and whether his time with the “Fear” survivors will be before or after he found his zen. It will be interesting to see how fans react to seeing a character from one serious joining up on another and whether it will help either of the shows recent declines in viewership.

Here’s a pic of Lennie at his first table read for the new gig: 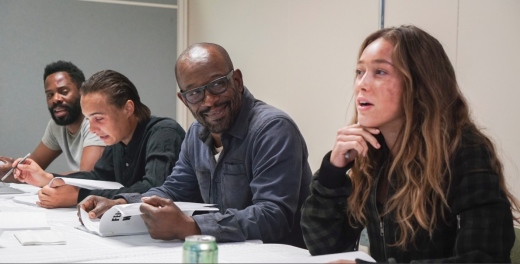