It looks like Merle got an “Evil Dead” makeover for his stump!

This week’s Entertainment Weekly just came out with four preview covers for season three of AMC’s The Walking Dead. There’s also some great new info in the article. The big news is another casting announcement in the way of Dallas Roberts being cast as a new character in the show called Milton.

Here is what Kirkman had to say about the new addition to the show:

“Milton is the details guy. He’s the guy that works with the Governor, who is monitoring all situations and is trying to help the Governor make sense of this world that they’re living in. He’s not exactly a scientist, but he’s a smart guy that is trying to find out how zombies behave. Watching him do his little experiments is going to be a lot of fun.”

Here’s what else he had to say about the show:

“This season really is about setting up these two worlds and watching them come to a head and collide,” says exec producer Robert Kirkman. “And you know that there are going to be some pretty explosive encounters between Rick and the Governor. This season is going to be about getting to know these two characters, and then waiting for their eventual confrontation that could destroy everything.”

Below are the new covers for the show. For me, the coolest one is the one with Merle, get a look at the Army of Darkness style stump weapon he’s sporting! 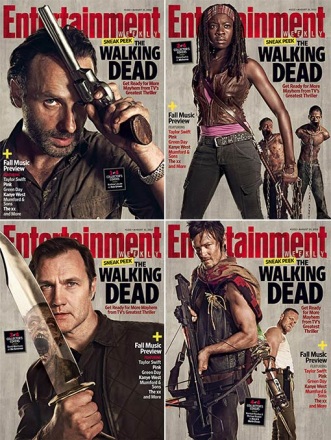