Tim Gunn of “Project Runway” Is The Next Iron Man?!

Marvel Entertainment has announced that on August 26, they will release a sartorially minded mini-series entitled “Models Inc.” 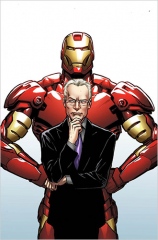 Similar to the recently released “Lockjaw and the Pet Avengers,” Marvel Entertainment has announced that on August 26, they will release a sartorially minded mini-series entitled “Models Inc.” It will unite some of its fashion-friendly supporting characters such as Millicent Collins (Millie the Model), Patsy Walker (the superheroine Hellcat) and Peter Parker’s on and off again wife/model/actress, Mary Jane, and have them lead in starring roles.

The runway divas will team up to clear Millicent, who is the prime suspect in a murder mystery story, where a young set designer is murdered during New York Fashion Week. Think of it as “Charlie’s Angels” set in the fashion world.

And what would the angels be without a mentor? That’s where Tim Gunn of “Project Runway” comes into play. While Gunn won’t appear till issue two, Gunn is expected to jump into Iron Man’s armor to save a fashion exhibition from those who seek it harm.

Gunn is expected to also grace one of the variant covers to the first issue of “Models Inc.” drawn by popular comic book artist Phil Jimenez who had illustrated Amazing “Spider-Man” No. 583, which featured President Obama and Spider-Man. “Spider-Man” No. 583 was estimated to have sold more than 520,000 copies according to sale analysis on the Beat, a comic book blog of Publishers Weekly.

Gunn who is more of a fashion guru than a comic book geek is not sure how he will be portrayed, but is excited and eager to seeing himself as a Marvel action figure.

“To say I’m a character in a comic book is wild,” says Gunn.