Holy crap, how much more Twilight news could you hope for in one post?

There’s a few different things going on with Twilight today, so I thought I’d just pack it all up together for you in one gigantic bite of goodness.

First thing first. The poster for New Moon finally came out today and fan reaction has been rabid. Enjoy, but then scroll down for the rest of the news. (Tiny spoiler below for people who have not read the fourth book in the series.) 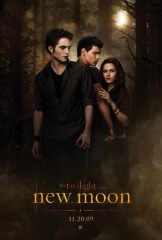 Next up on the menu is that Robert Pattinson announced the other day when fans will get their first look at footage from New Moon. Just tune into the MTV Movie Awards. Robert Pattinson, Kristen Stewart and Taylor Lautner will be presenting an exclusive, never-before-seen clip from their upcoming vampire sequel “New Moon” during the live broadcast on may 31st.

Finally, it came out in THR today that Robert Pattinson is confirmed for the fourth and final Twilight Film, Breaking Dawn.

Fans have been hoping for a movie version of the fourth novel from Stephenie Meyer’s best-sellers, so Pattinson’s commitment is the biggest fillip yet. The fourth book (caution — spoiler alert) centers on Bella and Edward’s marriage and her subsequent pregnancy.

He also had this to say about New Moon:
The script adaptation for “New Moon” beefs up his character’s role considerably — in the book, Edward is a “a voice in Bella’s head,” he said.

Said Pattinson, laughing: “You’re playing a figment in Bella’s imagination so I was trying to do it in a 2-D way. I hope it doesn’t translate onscreen as being boring.”