Warner Bros. is planning on rebooting their legendary Looney Tunes cartoon series that include Bugs Bunny, Daffy Duck, Porky Pig and the rest of the looney gang. 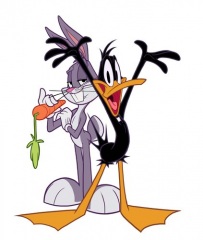 Warner Bros. is planning on rebooting their legendary Looney Tunes cartoon series that include Bugs Bunny, Daffy Duck, Porky Pig and the rest of the looney gang.

This will be the second reboot with the first being the failed “The Loonatics Unleashed” that barely made it past the two years mark. “The Looney Tunes Show” is the title for the new series and there will be 26 half hour episodes that will air on the Cartoon Network in the fall.

The show will star Bugs Bunny and Daffy Duck as roommates with Yosemite Sam, Tweety Bird, Sylvester, Marvin the Martian and Porky Pig as their neighbors.

In a interview with NY Times president of WB TV Peter Roth said, “We talked at great length about whether we were audacious enough to take on such iconic treasures. It’s both costly and risky, but I think an extraordinary opportunity. We want to reinvigorate the brand with the best possible execution — high-quality, high-end state of the art.”

According to the vice president of creative affairs at Warner Brothers Animation Sam Register, this new new series will have the same charm and appeal as the original from the 1940s. Everyone’s favorite characters from Bugs, Daffy, Porky to the rest of the crew will for the first time in years look and behave similarly to how they did in the original classics.

“The minute you start drawing Bugs Bunny exactly as he was drawn in 1949, you expect the same animation and the voice to be exactly the same. That’s obviously not possible, so you pull the best stuff from the characters and do something slightly new with it.”