Casting for Snyder’s “Superman” reboot has begun, and with that also the rumors.

Casting for Zack Snyder’s “Superman” reboot has begun, and with that also the rumors. Currently leading the pack is the rumor that Snyder wants “Watchmen” actor Matthew Goode to play the Man of Steel. Goode has worked with Snyder before, playing the superhero Ozymandias in DC Comics’ “Watchmen.”

According to the rumors being reported by MovienewZ, Snyder is interested in casting Goode as the mild-mannered news reporter Clark Kent and using CGI for Superman. It would be an interesting idea, one that’s been done in several films thus far such as “Where the Wild Things Are,” and Warner Bros.’ own “Green Lantern” starring Ryan Reynolds where his Green Lantern costume is entirely CGI.

Goode certain fits the part with his blue eyes and 6’2 frame. With the enhancements of CGI the actor probably doesn’t even have to worry too much about bulking up. Not that Christopher Reeves or Brandon Routh were ever that bulky when they donned the red cape and blue tights.

I’m not sure how I feel about Goode as Clark, I never really liked him as Ozymandias and felt he was too skinny and nerdy to play a superhero. In fact, his casting as Ozy was probably my least favorite.

What do you think about Goode as Clark Kent/ Superman? Sound off below and let us know. 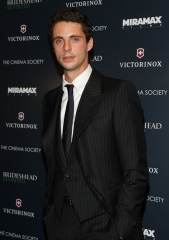