Will Dr. Horrible Be Playing The Flash?

He became legen-, wait for it… dary, as Barny Stinson in How I Met Your Mother. He redefined awesome as Dr. Horrible. And… He rode a freaking unicorn in Harold and Kumar 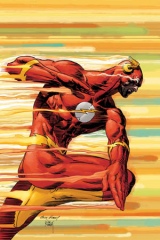 He made a name for himself as Doogie Howser. He Grew some balls in Starship Troopers. He became legen-, wait for it… dary, as Barny Stinson in How I Met Your Mother. He redefined awesome as Dr. Horrible. And… He rode a freaking unicorn in Harold and Kumar. Sure, that’s quite a resume, but can you picture Neil Patrick Harris as The Flash?

Ya, it is a pretty wild rumor, but the story is that NPH is being pursued to play DC Comic Book Legend The Flash. Old stories had attached Ryan Reynolds, but from what we hear there are concerns about how similar the personalities are between flash and Reynolds current role, Deadpool.

This whole movie is pretty much a mess, as fun as mess as it is. Going back to 2004, David Goyer was actually supposed to write the script, but… and thank god for this but… He ended up writing Dark Knight instead.

There’ve been a a few directors attached, and a few writers, the latest of which is writer Dan Mazeau.

The news, which comes to us via ThinkMcFlyThink.com, says that both NPH and Speed Racer actor Scott Porter are being vetted for the role.

Sure, its just a rumor, but I think it could be a pretty great fit. The guy’s a good actor and he sounds like one of the nicer guys in Hollywood. He’s definitely paid his dues to the industry. I guess we’ll just have to see if it pans out.