Check out the great new viral and a lot of new Spider-Man info that was unveiled at today’s WonderCon Panel.

Amazing Spider-Man was probably the most anticipated panel at Wondercon today and the studio made sure that there was some level of interaction for fans at the con and at home by releasing a new viral clip through a wanted poster that was handed out at the con (see image below). When you call the number on the poster (877-651-8503), it directs you to the website: webbedmenace.com. This will most likely be where the next step of the viral campaign takes place.

it was actually started off very nicely with a several minutes long news report featuring Capt. George Stacy (Dennis Leary) as he talks about his dislike for Spider-Man who he considers a vigilante and possible criminal.

There was also a lot of new info for the folks lucky enough to attend the panel. Footage wise, fans got to see the same stuff that was shown off at the Markofthespiderman screenings a couple months ago. Info wise, though, there were some interesting things said. 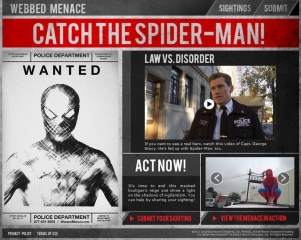 – Peter’s motivation for his aggressive and sarcastic attitude comes from being abandoned by his parents at a young age.

– Sadly, they are moving away from Uncle Ben’s death as the catalyst for Peter becoming Spider-Man.

– The movie appears to be taking a “Batman Begins” turn by focusing more on Peter as an orphan and his life pre-powers.

– Emma Stone originally read for the role of Mary Jane. Does that mean MJ is in the movie? We have no idea!