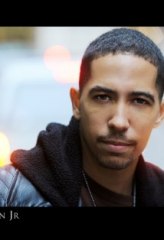 The other day we had the chance to sit down and talk with Neil Brown Jr, the man who will be playing one of the first major characters on ‘The Walking Dead’ that was created by Frank Darabont and Robert Kirkman outside of the graphic novel. Below is a portion of our interview where he sheds some light on his character and the possible direction of the rest of the first season of the show.

Brown is also one of the stars of the upcoming movie: ‘Battle Los Angeles’. He told us a whole bunch about his work on that project as well, but you’ll just have to check back later in the week for that. Today is all about ‘Walking Dead’.

YBMW: You’ve got a whole bunch of stuff ahead of you. You got, you just did ‘The Walking Dead.”

YBMW: And that’s coming up this weekend, right?

Neil: Yeah. I just actually saw the trailer for next week’s show.

YBMW: I don’t know how much you’re allowed to tell us, but what can you tell us about your role?

Neil: As you can see from the preview – I don’t know if you saw it. I’m a boss who is in ch-… OK. Andrew Lincoln and, you know the survivors?

Neil: They run into some other survivors. You know, kind we’re dealing with the show. These survivors are Latin gang members… And they’ve got guns too. There’s just this big fight and…. Hmm, I can’t say that.

There’s this huge fight between them and it’s up to the survivors… I can tell you the story follows them going right along with the other survivors that they run into. There’s this fight and then there may be some exchanges, there might be a… you can throw the word “hostage” around. So they basically just run into some really bad guys.

These bad guys have a boss, and that’s me. From the point where they run up with my guys, it’s kinda my show from then on, in the sense of my character is very, very important to the episode. So it’s really hard to even talk about anything. I’m actually tipping my words a little bit so I don’t get in trouble and give away too much of the plot line.

Because it is new, and it’s something Robert Kirkland and Frank Darabont came up with on their own. It’s one of the episodes that they took liberties with and just created a new storyline.

So it’s a big secret. There’s a huge twist, just so you know. That’s one thing I can say. The character’s great. He’s strong, he’s tough, he’s the boss of bosses. He’s like El Jefe, you know? 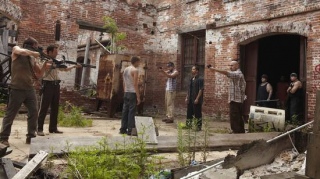 YBMW: So, is this a one-episode appearance, or are we gonna see more of you on the show?

Neil: This is the first episode I appear in.

YBMW: Is it the last?

Neil: This is the first episode I appear in.

Neil: You know what I’m saying?

YBMW: Absolutely. Now, had you read the comic book before?

Neil: I never read the graphic novel. I’m a huge comic book fan. People always ask me, “So what do you read?” and I’m like “Reading’s overrated. But, *I do read comic books.”

YBMW: So now you’re coming into the Walking Dead. You’re part of the giant zombie craze.

YBMW: So what do you think about the whole trend in zombies right now?

Neil: I think it’s just a reflection of what people are wanting to see on film. That chaos… The realism. Like people- it’s the same thing with the, like the video games and why they have become so in-depth now, like why you will play such realistic, Black Ops and Modern Warfare and each one of those games now has zombie campaigns on it. It’s everywhere, it literally is everywhere now. And I just think it’s just like any other thing . It’s like back in the early 90s when we had ‘Interview with a Vampire’ and ‘Dracula’ and people don’t realize is back then it was all about vampires, just like it was like with ‘Twilight’ and ‘True Blood’ and all that stuff. It’s a cycle… here in America, in particular, it’ll be the zombie craze right now, and then it’ll be back into either the superhero craze or the buddy comedy cop craze. You know what I’m saying?


Check back tomorrow to hear Neil’s take on what he saw when he came face to face with the new storyboards for the upcoming ThunderCats Animated Series!