The Superman Marketing machine is in full swing and we are getting more and more info on the upcoming Man of Steel movie. Zack Snyder and Henry Cavill sat down with EW and gave a whole bunch of new info on the film.

The biggest nugget that he probably dropped was this one:
“I’ll be honest with you, there’s no Kryptonite in the movie.”

On the major differences of how they approach the Superman Mythos:
This film reveals that even on Krypton, young Kal-El was a special child, whose birth was cause for alarm on his home planet. (More on that in the magazine) And once on Earth, his adoptive parents, Ma and Pa Kent (Kevin Costner and Diane Lane), urge him not to use his immense strength – even in dire emergencies — warning that not every human would be as accepting of him as they are. So Clark Kent grows up feeling isolated, longing for a connection to others, and constantly hiding who he is. As a result, Man of Steel presents the frustrated Superman, the angry Superman, the lost Superman. “Although he is not susceptible to the frailties of mankind, he is definitely susceptible to the emotional frailties,” Cavill says. 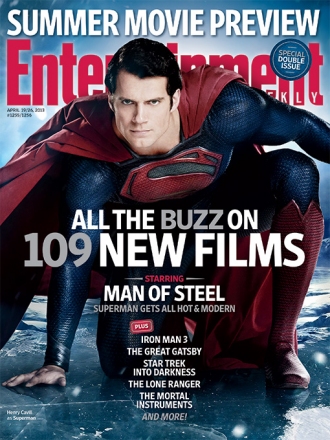