Zack Snyder On How His ‘Justice League’ Would Have Ended

Well, that would have been better.

The rumors were wrong. There is no Snyder cut of Justice League. So, while we will never get to see the un-whedoned version of Zack Snyder’s vision for the Justice League, we do get plenty of tidbits about it from the man himself. Most of this news comes to us from the fledgling social media network, Vero. In fact, I’m pretty sure that the only time we hear about Vero is when Snyder uses it to make a comment.

The latest bit of news that the director has dropped over there is in relation to his version of the film’s original ending and its relation to a particular behind the scenes image. Apparently, Snyder had planned that shot to show Batman, Superman, Wonder Woman, Flash, and Cyborg staring headlong into a boom tube.

If we pair this up with earlier rumors about the film, there is a solid chance that the thing they were staring at on the other end of the tube was none other than Darkseid on Apokolips. 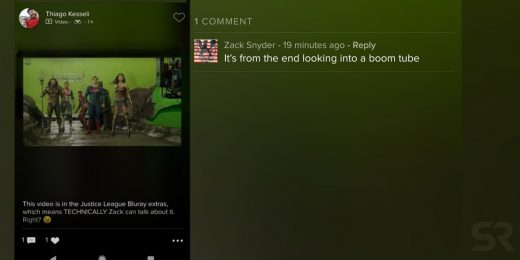