“What I wanna do is make the f—ing Wall. I want to do the hip-hop Floyd.”

Joaquin Phoenix is a great actor. No one is really arguing that point. The funny thing is that the people who talk about his career don’t really know just how far back it goes. For most people, he first came on to the scene in Gladiator or Signs. There might even be some people who remember him from 8mm. the truth is, he’s been acting in Hollywood since 1982. Back then he was known as Leaf Phoenix and he was doing after school specials, TV guest spots, and taking roles in 80’s classics like Space Camp and Russkies.

Here’s the opening of Space Camp. Skip to the 9 minute mark to see a very young Leaf Phoenix make his entrance.

Joaquin was born in Puerto Rico to Children of God missionaries family. Along with his parents he had 3 sisters and an older brother who you may remember… River Phoenix. After traveling all over, his family finally settled in Los Angeles where his mother, Heart, served as the catalyst for the family’s entrance into entertainment. It was her job as a secretary at NBC that opened up some of the early doors. 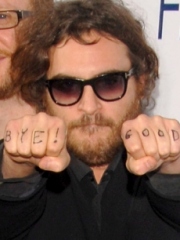 After years of moving in and out of the entertainment industry, it was a tragic moment that actually put him on the path back into film. Halloween night in 1993, Joaquin was at the Viper Club in LA with his brother River when he collapsed from a drug overdose. It was Joaquin’s who made the 911 call the night that his brother died. The recording of that call was played thousands of times on TV and radio programs all across the world.

A few months later his friends finally wore down his resistance and he started reading scripts again, finally settling on Nicole Kidman’s To Die For, as his return to film. From there, its been a quiet, but impressive rise to fame. Pretty soon he was picking up roles in films like Inventing the Abbotts, and Oliver Stone’s U-Turn.

In 2000, he finally hit it big. He had just done 8MM the year before and doors were opening up for him all over. In that year he not only came out in Gladiator with Russel Crowe, but he also had two great indie performances in The Yards and Quills (The amazing Geoffry Rush Marquis de Sade film).

His roles in M. Night Shyamalan’s Signs and The Village helped cement his fame, but it was his role as Johnny Cash that made him a Cinematic Legend.

Sure, he had a interesting and colorful life with with triumph and tragedy, but what the hell happened to turn him into the man that people just can’t stop talking about from his recent Letterman performance.

Is it possible that the man we saw in that interview is the real Joaquin Phoenix as he truly is today? A retired actor hoping to break into the world of Hip Hop?

There’s a lot of signs that point to yes. First off, if he’s faking, he’s doing a hell of a job. You can see how serious he’s taking the entire thing in the Letterman video.

Then there’s the recent interview with James Gray, the director from his final film, Two Lovers. Not only does he believe that Phoenix is heading to Hip Hop. He thinks it might be his fault!

“That rap thing in the movie actually comes from something I played for him. It turns out that Joaquin is imitating me in a lot of the movie. He said, ‘I want to do the rap that you used to do.’ I said, ‘OK.’

“Then I find he’s built a recording studio in his house. He’s working with Diddy. I tried to talk him out of it. He got very angry.

“I feel very bad about it… like I’m the guy who destroyed Joaquin Phoenix.

… Which leads us to the third item on the list, Diddy, the man who updated “Cake or Death”, with “Vote or Die.” It was recently announced that Sean P. Diddy Combs will be acting as the producer for Joaquin Phoenix’s first rap album. Some of the tracks we can look forward to on his first album include: ‘Can I Get a Refund?,’ ‘If You’re Going to San Francisco,’ and ‘Daddy Dum Dum.’

It won’t just be Diddy who is helping out on this first album either. Here’s what he had to say at a recent press conference.

“I want Dermot Mulroney, the “My Best Friend’s Wedding” actor. “He is an amazing cellist. … I’d love to get Flea [from the Red Hot Chili Peppers]. I saw [Method Man] recently at House of Blues perform with Redman, so he said he wanted to come in and do a verse. Also, Diddy knows a lot great people and stuff. … My dream would be to have DJ Premier produce a track and have Chuck D too — but Chuck D would never do it.”

In regards to his sound, here’s what he had to say:

It’s “under construction. I sound like such a f—ing di–, but what I wanna do is make the f—ing Wall. I want to do the hip-hop Floyd. … I have one track right now that’s five minutes that I’m trying to make seven. It might just be seven minutes of pure misery, but hopefully it’s seven minutes.”

“It’s not about success. It’s not about quote, unquote ‘being good.’ It’s about an experience. I didn’t act because I wanted people to say I was good; I enjoyed that process. And now, I enjoy this process. What can I say? [My rap album] might suck. Everyone might hate it, and I might be the only one who likes it. But that’s OK, because I’m having an amazing time making the record.”

Ok, so he definitely sounds sincere. There’s no doubt about that. He comes across as a man on a mission… but what about Casey?

Casey Affleck, brother to Ben, is married to Joaquin’s sister. He’s also filming a documentary about his brother in law’s transition from actor to rapper. They have said countless times that the project is not just some borat style hoax with a film as the punch line after he’s tricked the entire world. I just don’t believe it. There’s something about this fish that just smells … well, fishy.

With all the damage that’s been done, especially now that people are saying that they think Phoenix was on drugs in his Letterman appearance. Add to that the fact that Casey Affleck is always there. Always. Every interview, every press conference and concert. He’s always there with the film rolling. He captures not only his brother in law, but the reactions of the crowds and media as they slowly begin to believe the story.

Its all too perfect. It’s Tony Clifton without the Andy Kaufman alternate persona. I could be totally wrong here, but sometimes puzzles come together just a little too easy. You’ve got the industry support, the guilt ridden director who fears he’s “ruined” Phoenix. We’re watching a movie happen in front of our eyes.

I wonder how it will look on the big screen.