Live through Comic-Con’s “The Walking Dead Escape” with our first account of what it’s like to survive the zombie apocalypse.

We were working hard all weekend to make sure you had the latest news from all the panels, but meanwhile, our correspondent, R.J. Parsons was risking his life (kinda) and running the infamous Walking Dead Escape Obstacle Course at Petco Park. He was kind enough to write about it for us and here’s what he had to say: 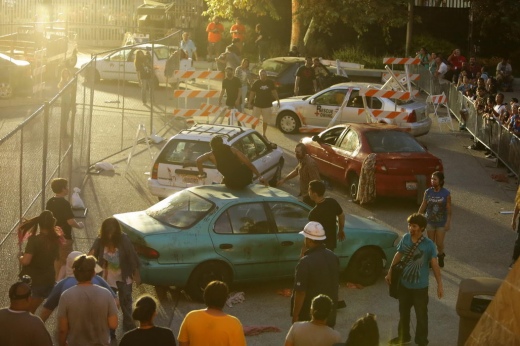 When the idea of running in a zombie obstacle course was first brought to me, all I could think was “By all means YES!” One, zombies, how could you go wrong, and two obstacle course, see point one. The Walking Dead Escape by Skybound offered both of these at the San Diego comic con this last weekend.

From the start this was a pleasant and easy experience. All email correspondence pleasant, helpful and quick. There was a clearly marked booth at comic con that had all info set up and ready to help. The
registration at the event was well organized and efficient for dealing with the sheer numbers of people. You’re given the choice of being a survivor (runner), a zombie, or a spectator. The zombies, from what I understand, were given lessons in zombie’ing (yes it’s a word now), as well as done up by make up artists so they look the part as zombies. I chose survivor because running the course was far more up my alley. Once there and lined up, ready for the run, the excitement built.

Military personnel were running back and forth while screaming of the outbreak and running to safety. Sets are around, barricades put up, all the pieces needed. You’re led to the starting point awaiting your start time, then as you’re just about ready to start the run, full of excitement, wanting to dive in, that’s when the screaming starts. Echoing out of the course, terrified screams for help are heard and
you start to wonder, “What am I getting into?” Then you’re turned loose and told to run.

The course was about a mile long, running shoes would be a good idea but not required. I was able to do the course in Doc Martens. There is a lot of up hill running while heading to the upper levels, about 3 stories up. There are a few reprieves in the running but you’re out of breath a lot of the time. The immersive environment was well done, the characters you meet throughout are very much into their roles and having fun. There was a water break about half way through to make sure everyone was taken care of, followed by more running.

The amount of zombies starts out light, then the farther in you go, the thicker they get. You do get the anxious slight panic feeling of being pursued. You know it’s a set up, you know the zombies aren’t real, but your heart panic skips a beat every time you have to dodge by 1 in a near miss.

There is also a spectators section where you can view the runners as they go by. Through my own experience in the maze as well as friends observations from the spectator zone we came up with a few tips for anyone going through the maze.

#1. Pretend to be a zombie to get through tight places. Sounds comical, but it actually worked at one point when things were thick. It will let you be slightly out of sight for a second. A good lurching walk, head down can help get you out of a tight place. Don’t overstay your welcome though, they will catch on.
#2. Let other people run ahead to distract the zombies. If you can stay behind a large group and use them as a quarterback would a front line this can be effective. Obviously not the most honorable method and slightly opportunistic, but hey, better their brains than your own.

#3. Don’t be distracted by your cell phone. May sound silly but let’s be honest, when the end of the world comes, so will the latest round of selfies. The zombie race was no different, many people with cell phones in the air or taking of selfies with zombies in the background. Let’s face it, some people are doomed from the get go.

When you finally make it to safety, you’re led to a large tent that is blacked out and given a speech of how wonderful you did, that you’re finally safe, and THEN, well, no spoilers from me, I hate people who
ruin the end of things. There’s only one way to find out. So, to wrap up, I would go run this the very next chance I got. It was incredibly fun and the people running it put a lot into it. I applaud all who worked on this event as, from a survivor standpoint, they did marvelous. This was well worth it. 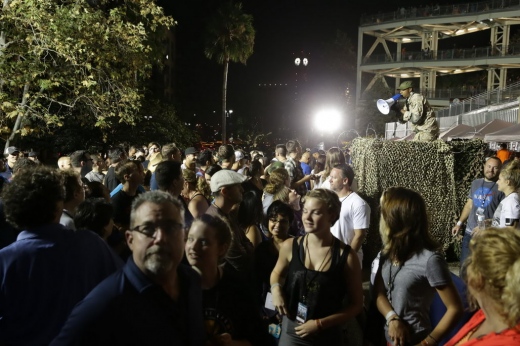