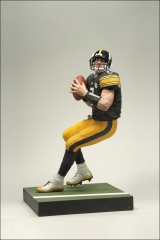 2009 is quickly becoming a great year for McFarlane Toys football fans. Our tremendously popular 12-inch scale figures are immense in detail and will be the premier item of any collection.

Take one look at our photography of these two action figure collectibles and you will agree.

In just five seasons with the Pittsburgh Steelers, Ben Roethlisberger has won two NFL Championships and has become the second most prolific quarterback in franchise history, behind Pro Football Hall of Famer Terry Bradshaw.

TONY ROMO
The star leader of “America’s Team” is featured in his Dallas Cowboys white home jersey and is also making his 12-inch Sports Picks debut.

In one of the more intriguing success stories in recent NFL history, Tony Romo ascended from the ranks of an un-drafted free agent — and three-year back-up quarterback — to a record setting, two-time Pro Bowl selection for the Dallas Cowboys.

These two fan-favorite football heroes are coming to stores this November. 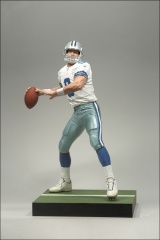