Hundreds of workers can be seen rallying at government offices demanding government intervention to secure more than six-weeks worth of unpaid wages. 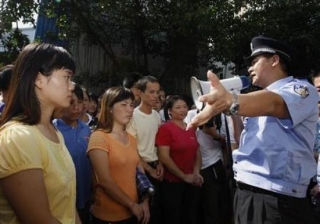 Toymaker Smart Union Group, a Hong Kong-listed firm shut its factory doors in the nearby city of Dongguan in Guangdong province putting 7,000 factory workers out of work.

Makers of toys for U.S. brands such as Mattel, Hasbro and Disney, Smart Union Group is just one of thousands of export manufacturers that have suffered due to the global economic crisis and are forced to shut down in order to cope with falling exports.

Unemployment overseas has become a growing and pressing concern as hundreds of workers can be seen rallying at government offices demanding government intervention to secure more than six-weeks worth of unpaid wages.

According to a 42-year-old assembly line worker who stood outside the shuttered Smart Union Group factory, “This financial crisis in America is going to kill us. It’s already taking food out of our mouths.”

Likewise, factory worker Huang Luohui, 33, who is owed two months’ wages says, “I feel very agitated. I have waited for a few days now, we need money to pay for our housing and food.”

The increase prices of raw materials is partially to blame as Smart Union Group reported a loss of more than $26 million for the first six months of the year. By the end of June, it had accumulated more than 500 million dollars in debt exceeding its assets.

As of now, it is still not clear if the poor factory workers will be paid in full the back wages owed to them.

And as if situations does not appear bleak enough, China’s state media also reports that factory bosses have gone into hiding, potentially escaping this turmoil affecting more than hundreds of Chinese workers.