This Mickey Mouse is almost entirely metal. Only his hands, face, shoes, pants and tail are not. He’s just around 6 inches tall and he’s chalk full of awesome. 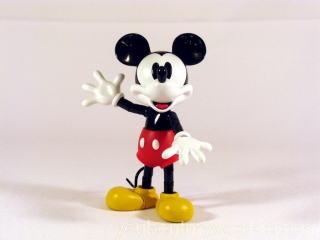 This review has been a few weeks in the making. Once in a while we get in a product that is just a little bit too good to be true and to be honest, we were starting to think that the idea of an articulated metal figure, especially of one as top heavy as Mickey Mouse, was just not going to be structurally sound. That’s why before doing this review, we gave this figure over 2 weeks of shelf time in various poses to make sure that when he’s up on your shelf, he’s not going to come crashing down on anything.

Mickey has been done in pretty much every format possible from statues to crystal to PVC. He’s even been done an any number of metals, but never like 86Hero has managed to make him. This figure is pretty impressive just for the fact that they actually made it work.

The Disney Mickey Mouse Hybrid Metal Figuration #001 is almost entirely metal. Only his hands, face, shoes, pants and tail are not. All in all, that’s about 70% of the figure. He’s just around 6 inches tall and he’s chalk full of awesome.

Let’s start off with the basics here. 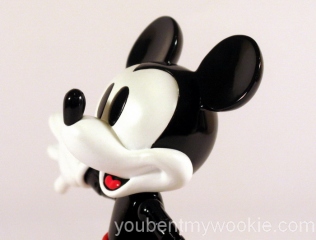 Paint: This was a big concern for me because almost every die cast piece I get usually has some paint chipping or something like that on it. Not the case here. Mickey was pristine. Great glossy finish and a totally even paint job. I have to say that I’m really glad they did the face and feet in plastic because it adds more dimension to the figure and it makes the color on both parts a lot more durable and less likely to have any sloppiness or easy wear/ chipping.

Articulation: There’s over 20 points of articulation on this figure and not a single joint was super loose or super tight. Mickey held every position that I put him in from the basic standing poses to the “Leonardo DiCaprio Top of the world!” pose that I left him in for an hour. You can bend the feet, rotate parts of the arms and bend others… it is one of the first Mickey Mouse toys that I’ve felt was truly able to move like the cartoon characters. 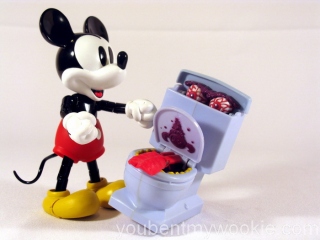 Accessories: Mickey comes with three sets of hands to fit just about any mood that you’ve got. They snap right on to metal ball joints without too much hassle. The three options are standard waving hands, balled up fists of fury and what we’ve been referring to as “STOP! in the name of love hands.”

For me, unless you’ve got Mickey doing push ups or old Motown Routines, the final set of hands is a little bit superfluous, but hey, at least you can make Mickey get down and give you 20.

Do I like this figure? Hell yes, but a lot of that is not so much for the figure itself (which is very cool), but for what it means for the future from 86Hero. This is the first in a line of hybrid metal Disney figures that are about to start hitting shelves. It will span across several Disney characters and even include some interesting character mash ups like Mickey Mouse as Woody from Toy Story.

Articulated metal figures are not something you see very often in the US market. They are definitely not the kind of thing you buy kids, but they are excellent toys and collectibles. There’s a quality you get from metal that just doesn’t happen in plastic. The Japanese market has already embraced this type of product years ago. Once again, we lag behind like that last unwanted piece of sushi on the conveyor belt. Personally, I can’t wait to see what 86Hero comes up with next. 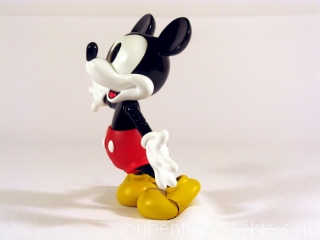