We don’t show a lot of watches on the site because a lot of them just don’t really have that special something that make them super geeky… The new “Eco-Drive SATELLITE WAVE,” from Citizen is about as geek as you can get.

We don’t show a lot of watches on the site because a lot of them just don’t really have that special something that make them super geeky… The new “Eco-Drive SATELLITE WAVE,” from Citizen is about as geek as you can get.

This freakishly amazing watch is actually tied in with the super popular anime series, Appleseed. Check out this vid and then look at the pics below. 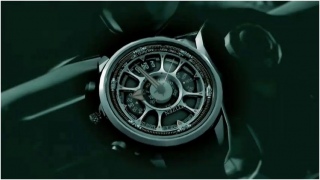 Time from Outer Space
For 2011, CITIZEN introduces “Eco-Drive SATELLITE WAVE,” a limited edition watch with a totally new timekeeping system. This next-generation timepiece searches for the closest of the 24 navigation satellites that orbit the earth. It captures the day, date and time signals the satellite emits from space, 20,000 kilometers above the earth. Since the satellite signals are controlled by atomic clocks, this watch’s timekeeping is ultra precise. Each of the 24 navigation satellites orbits the earth once every twelve hours, so that this watch receives the signals from any open space, even in the boundless Western Pacific or atop the world’s highest peak.

The metal ring embedded in the glass bezel seems to float in outer space, like a satellite in planetary orbit. The round case, which appears to be independent of the lugs, suggests the image of the earth. These design elements resonate with the technological combination of light power and time/calendar data received from outer space to keep this watch on time, always. The spiral parts visible from the sides of the glass bezel are both a design motif, suggesting the radio waves that link this watch with outer space, and visible symbols of the light waves that provide Eco-Drive an inexhaustible source of energy. The three-dimensional forms on the watch face evoke the futuristic image of spaceship engines.

2011 will, thus, be the year in which time signals link wrist and outer space in an unprecedented experience. Eco-Drive SATELLITE WAVE will bring ultra-precise timekeeping to whatever human beings do, wherever they are on the face of the earth. It is purely powered by light.
Specifications
-Calibre H990
-Satellite Timekeeping System (Reception Area: Worldwide)
-Perpetual Calendar
-World Time in 26 Cities
-Ceramic + Stainless Steel Case
* The final design and specifications are subject to change without notice.
* Pricing and production volumes to be determined.

And check out the promotional video:

This film is the result of collaboration between CITIZEN and the animated series APPLESEED XIII. Eco-Drive SATELLITE WAVE draws its energy from light and receives signals from navigation satellites to display accurate time. Through the medium of animation, one of Japan’s leading cultural exports, the film encapsulates the world view that inspired this watch.
Dawn breaks over Olympus, a solar-powered city of the future.
Time signals stream down from space.
The leading characters of APPLESEED XIII, Deunan and Briareos, sprint through the city. The hands of Eco-Drive SATELLITE WAVE on their arms move in unison as they receive accurate time signals from navigation satellites. Time signals stream down from space to every corner of the earth.