Bowlingual, A Bark Translator Letting You Talk To Your Dog

Ever wondered what your dog is saying when he barks? Dream about being Doctor Dolittle but not smart even to even finish community college? 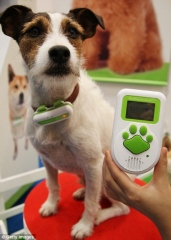 Ever wondered what your dog is saying when he barks? Dream about being Doctor Dolittle but not smart even to even finish community college?

Developed by Takara Tomy, a Japanese toy company, the Bowlingual Voice bark translator is a device that allegedly translates a dog’s bark or feelings into words people can understand.

The gadget which retails for $215 USD is placed on your dog’s collar and comes with a receiver that would translate the dog’s barks. The Bowlingual can then tell you if your dog is sad, joyful, alert to danger, needy, happy or frustrated. All translation is displayed on the receiver which can also play audio phrases like “I feel sad” or “Leave me alone.” There is also an answering machine function which can record your dog’s expressions of desire when the owner is away.

The model was first created seven years ago by Dr Matsumi Suzuki and sold more than 300,000 units, but the latest version will be the first to include sound.

The device is said to work best on adult dogs.

The toy will hit the Japanese market on August 27th and will only be available in Japanese. A US version is currently not planned. So dog owners who don’t know Japanese but are desperate to understand and emote with their dogs will still have time to learn it.