Part 3 of this multi-part statue, featuring Batwoman and Commissioner Gordon standing on a rooftop in Gotham City, ready to take action. 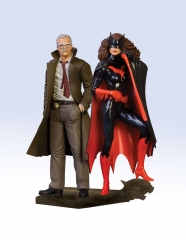 It’s the ultimate collectible for Batman fans! Batman and his allies team up in four separate pieces (sold in three parts) to form a single statue.

Solicited this month is Part 3 of this multi-part statue, featuring Batwoman and Commissioner Gordon standing on a rooftop in Gotham City, ready to take action. This part of the statue follows the other pieces of the statue: Part 1 features Robin and Catwoman reclining on a gargoyle and Part 2 features Huntress and Nightwing heroically surveying the city.

The bases of each piece slide together to form a shot of the entire Batman family on a rooftop overlooking Gotham. Each of the three parts includes a piece of the fourth portion of the scene, which can be easily assembled to form Batman, who looms in the back of the scene. All three parts of the statue are needed to make Batman.

The BATMAN FAMILY MULTI-PART STATUE is limited-edition, hand-painted, cold-cast in porcelain, includes a 4-color Certificate of Authenticity and is packaged in a 4-color box. Manufactured to order. 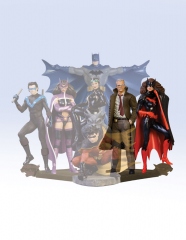