This is BBP’s first 3 3/4-inch scale figure and it will be available exclusively at SDCC11 and NYCC11! There will be a regular Dexter 3.75″ figure coming later in August.

In the super-popular Showtime TV series, Dexter is a blood-splatter expert for the Miami Police Department by day that spends his nights going after serial killers and other bad people.

The Dexter Dark Defendor action figure is currently available for preorder at Entertainment Earth for $14.99. 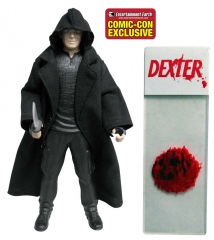