Lawrence Talbot transformed into The Wolfman, and Mezco has transformed him into a Mez-It!

Lawrence Talbot transformed into The Wolfman, and Mezco has transformed him into a Mez-It! Universal’s classic monster returns with “The Wolfman”, a new big budget film starring Academy Award winners Anthony Hopkins and Benicio Del Toro – opening February 10th, 2010. Mezco’s Wolfman Mez-It transforms Universal’s snarling terror of the moors into a fun designer-vinyl figure. Standing six inches tall, with six points of articulation and based on the new movie’s creature design from Academy Award winner Rick Baker, this Mez-It captures the essence of The Wolfman. From his terrifying fangs and pointed ears, to his clawed hind paws, this Mez-It is sure to please Wolfman fans everywhere!
Ship mid-January 2010.

For info on the film visit: http://www.thewolfmanmovie.com/ 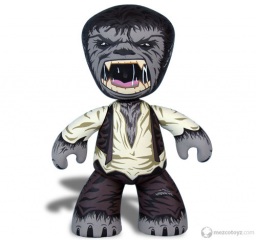