Take a look at all the great toys getting ready to hit the market this August for the new Nickelodeon Teenage Mutant Ninja Turtles toy line!

The Teenage Mutant Ninja Turtles have had their ups and downs when it comes to cartoons and toys. There are still some of the old original ones on my shelf… and there are more than a few that I wish had never been produced over the years. Now Nickelodeon is bringing back the Turtles for a younger set of viewers and they are releasing a whole new line of toys along with it. It is great to see some of the similarities between the old designs and the new ones… and it is also pretty cool to see some of what they have done to update the line. Also, why didn’t they have a sewer playset like this when I was a kid?

Here are the full details:

ACTION FIGURES
Basic Action Figures: With more than 12 points of articulation, these action figures are the most highly detailed and articulated Turtle figures ever made! Each turtle figure is uniquely sculpted, with heights ranging from 4.25 inches to 4.75 inches, to capture the individual personalities of the characters from the Teenage Mutant Ninja Turtles TV show. The line includes the four main turtles, Leonardo, Raphael, Donatello and Michelangelo, as well as their sensei, Splinter, and April O’ Neil, their human connection to the surface. Each Turtle is wearing his signature bandana and comes packed with their two core Ninja weapons for hours of Ninja playing excitement. A bonus weapons accessory rack is also included. The Basic Figure line also features characters from The Evil Foot Clan, including Shredder, The Kraang and a Foot Soldier. Each figure is compatible with the entire Teenage Mutant Ninja Turtles line of vehicles and playsets. (Ages 4+, $7.99 – $8.99 each, August 2012) 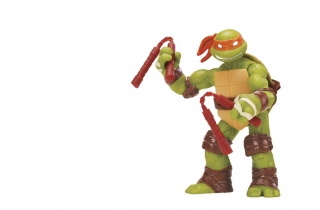 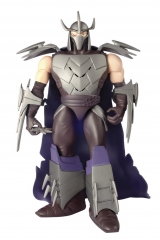 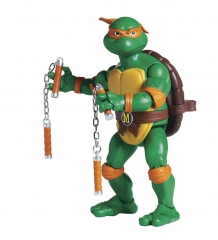 “Battle Shell” Figures: Available exclusively at Toys“R”Us, these oversized figured vary in heights from 10.5 inches to 11.5 inches tall. Each Turtle is fully articulated and comes with their core Ninja weapons that store either on their belt or their back holster, as well as secondary weapon accessories, which can be stored in the Turtles’ opening back shells. The “Battle Shell” Figures collection includes Raphael, Leonardo, Donatello and Michelangelo (Ages 4+, $29.99 each or all 4 for $100, August 2012, Toys“R”Us exclusive)

VEHICLES
Sewer Spinnin’ Skateboard: Compatible with all the Basic Turtle Action Figures, the Sewer Spinnin’ Skateboard comes ready to Shred! The skateboard looks just like the skateboard featured in the TV show and includes Ninja Battle Boost technology that allows it to perform up to 10 different skateboard tricks. Kids simply position their favorite Turtle in various configurations on the board, rev it up, release and watch their hero perform cool tricks! Includes a stunt ramp for high flying action! (Ages 4+, $10.99, August 2012) 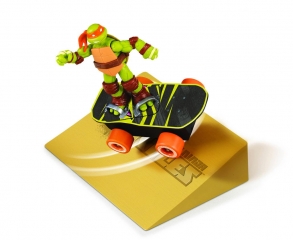 Rippin’ Rider: With the Rippin’ Rider, the Turtles can hit the road ready for battle! Compatible with all the Basic Turtle Action Figures, the Rippin’ Rider comes complete with classic Turtle details and textures, including chopper front forks, quadruple rear exhaust and a T-shaped headlight to sniff out The Foot wherever they are hiding. To fight against Shredder and the evil Foot Clan, the Rippin’ Rider also includes “Finger Flick Missiles” that will destroy the enemies on impact! (Ages 4+, $10.99, August 2012) 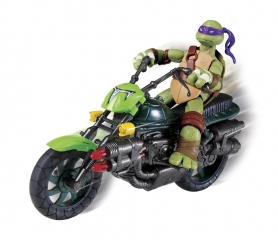 VEHICLES WITH FIGURE
Ninja Stealth Bike: A true Ninja needs a stealthy ride with awesome looks and details, and the Ninja Stealth Bike more than delivers! As seen in the TV show and compatible with all the Basic Turtle Action Figures, the Ninja Stealth Bike allows the Turtles to travel the streets hunting down The Kraang, without being seen! The vehicle features a textured turtle shell that covers the turtle from head to toe, and to on-lookers from above, makes it look just like the street. But with Ninja Battle Boost technology and the flip of a button, the shell opens, revealing a Ninja Turtle ready for battle! The cycle comes with an exclusive Raphael action figure decked out in his slick helmet and gloves. (Ages 4+, $19.99, August 2012)

Dragon Chopper: A bad enemy like The Foot and the dreaded Foot Soldiers need a bad ride, and the Dragon Chopper is a really, really BAD RIDE! As seen in the TV show and compatible with Shredder, the Foot Soldiers and the four Basic Turtle Action Figures, the Dragon Chopper has a look and style like no other. It includes Ninja Battle Boost technology, allowing kids to secure their figure on the seat. When ready for battle, kids simply push the activation button and watch as the action figure performs a 360 degree flip over the handle bars and lands on its feet, ready for battle! The Dragon Chopper comes with an exclusive Foot Soldier action figure, wearing his red Ninja outfit and a removable dragon helmet. (Ages 4+, $19.99, August 2012) 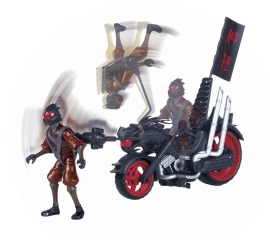 DELUXE VEHICLES
Shellraiser: When the Turtles need to hit the road and take command and control with them, they all pile into the Shellraiser. Built to run either on the subway rails or on the busy streets of New York City, the Shellraiser delivers all the fire power needed for the Turtles to travel together to take down Shredder and the Foot Clan! With entrances on the top, in the front and on the side of the car, up to eight Basic Action Figures can fit inside. The Shellraiser really packs a punch with Ninja Battle Boost technology, including a spring loaded cannon on the top of the car and a side door that automatically opens with the touch of a button, sending kids’ favorite hero in a half shell flying out the side with 360 degree Ninja flip-kicking action, to wage battle on anything standing in its way! (Ages 4+, $29.99, August 2012) 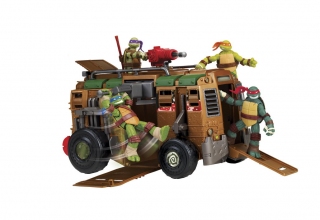 ROLE PLAY
Ninja Combat Gear: Do you have what it takes to become a Ninja Turtle? Kids can Turtle up in their favorite Ninja gear to find out! Each set includes the Turtle’s authentic noise-making ninja weapon, signature bandana and two throwing stars that will help transform kids into their very own hero in a half shell! The Leonardo set comes with a Katana Sword, the Raphael set includes two Sais, the Donatello set includes a Bo Staff, and the Michelangelo set features Nunchucks. (Ages 4+, $12.99 each, August 2012)

Leonardo’s Stealth Sword: Ever wonder what it would be like to be Leonardo and battle with his fierce Katana Sword? Now you can with Leo’s Stealth Sword! The fierce Katana Sword looks just like the one from the TV show and delivers the same power, and then some! Includes two modes of play: Training mode lets kids swing away, while hearing Leo’s voice and watching as the sword lights up with an awesome display; Battle mode let’s Leo give instructions as kids battle against evil mutants. The longer kids swing, the more awesome the light up effects become until they eventually defeat the enemy mutants! (Ages 4+, $19.99, August 2012)

PLAYSETS
Secret Sewer Lair Playset: The ultimate playset for Teenage Mutant Ninja Turtle fans, the Secret Sewer Lair playset is BIG, and ready for Ninja battle action! This playset will have kids creating their own Lair of excitement as they become the leader of the pack, swinging into action, training the Turtles and defeating Shredder once and for all! Standing 42 inches tall and resembling the Sewer Lair that is home to the Turtles in the TV show, the Secret Sewer Lair includes more than 20 different exciting Ninja features, such as: telescoping periscopes so the Turtles can keep track of what’s going on in the city; ropeswing and swing-down ladders for joining a battle at a moment’s notice; lines that can be connected to objects in a kid’s room, allowing the Turtles to rappel into battle; an elevator in the back of the set for easy transition from floor to floor; a Shredder statue so the Turtles can practice their Ninja skills; a computer lab for Donatello to master his latest invention; doors that open and close easily and floors that fall out, just in the nick of time; an ooze drain to douse the enemies trying to break in; and much, much more! (Ages 4+, $119.99, August 2012) 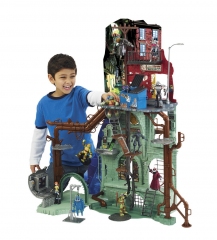