“I don’t think it’s going to happen… a lot of things would have to break just right for it to work. But we’ve daydreamed about it.” 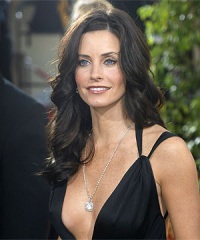 In a recent interview with The Los Angeles Times, Courtney Cox revealed not only did she and her “Friends” co-star eat nothing but a Cobb salad for 10 years while filming the show, but also that a “Friends” reunion is unlikely. Despite rumors and WB still hoping to put together a “Friends” movie.

“I wish we could do that with ‘Friends,'” the now “Cougar Town” star says, referring to the “Sex and the City” girls move to the big screen. “The thing is, the characters from ‘Sex and the City’ hopped all over Manhattan. On ‘Friends,’ we were always stuck in the apartment and that coffeehouse.”

“I don’t think it’s going to happen,” she says. “Would creators David Crane and Marta Kauffman want to write it? Because they’d have to be involved. I don’t know… a lot of things would have to break just right for it to work. But we’ve daydreamed about it.”

Cox also revealed how she loved playing Monica for ten years: “I loved any time she got super-competitive. The New Year’s Rockin’ Eve dance. The Thanksgiving touch football game with Ross. Fat Monica too.”

“God, playing Fat Monica was so freeing! I remember being in makeup one time waiting for the other cast members to come out, and director Kevin Bright put on ‘Shake Your Groove Thing’ and I just grabbed a doughnut and started dancing like crazy in front of the audience. I could do anything because I was hidden under all that prosthetic makeup.”