Toys”R”Us will offer a supersized experience complete with official San Diego Comic-Con merchandise, including toys based on characters from HALO, Ghostbusters and Robot Chicken. 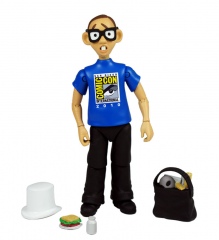 Beyond Comic-Con exclusive items, Toys”R”Us will also offer visitors the chance to be among the first to purchase the TRANSFORMERS Masterpiece GRIMLOCK, which will be available in Toys”R”Us stores nationwide beginning in August.

To help highlight these exciting exclusives from Toys”R”Us, Entertainment Earth will host a spectacular series of special signings, including:

– On Friday July 23 from 11 am to 12 noon, creators of Adult Swim’s Emmy Award-winning Robot Chicken, Seth Green and Matt Senrich will be on hand to autograph the new Robot Chicken action figure collection from JAZWARES.*

– As an added bonus, professional skateboarder, TV star and filmmaker Rob Dyrdek will visit the booth on Saturday, July 24 from 11 am to 12 noon to autograph Wild Grinderz action figures from Mattel.*

Based on the iconic class of Spartan-III super soldiers featured in the upcoming game, HALO: Reach, “Noble Seven” is outfitted for battle, complete with a custom armor load out, a studio-inspired paint job, and livery. Designed by a team of artists from inside video game designer Bungie Studio’s top secret lair, “Noble Seven” is the only Limited Edition Spartan action figure created exclusively for Comic-Con International 2010.

“Are you troubled by strange noises in the middle of the night? Do you experience feelings of dread in your basement or attic? Have you or any of your family seen a spook, specter, or ghost?” These lines, from the TV commercial featured within the classic film introduced Dana Barrett to the Ghostbusters moments before she discovered her refrigerator was haunted. Now, fans can recreate the scene, Minimates style, with this set featuring Ray Stantz, Egon Spengler, and Peter Venkman in their lab coats as well as Dana Barrett.

Now, fans can recreate their favorite Robot Chicken parodies, such as the Nerd’s visit to a Sci-Fi convention with this 5-inch action figure. Complete with a Hop Hat, Sandwich, Magical Unicorn Mayonnaise Jar, Adult Swim swag bag and a 2010 San Diego Comic-Con t-shirt, the iconic Robot Chicken Nerd character is ready to geek out with fans.

Now, kids, collectors and TRANSFORMERS fans can take home GRIMLOCK – the leader of the DINOBOTS – in this recreation of the classic G1 action figure. With the ability to change from a robot to T-Rex dinosaur, this fan favorite character comes with a glowing sword, DINOBOT crown of leadership, and a light-up blaster. And, when GRIMLOCK has transformed into dinosaur mode, his eyes glow with savage fury. This Toys”R”Us exclusive action figure will be available at Comic-Con International in San Diego before rolling out to Toys”R”Us stores nationwide.

All Toys”R”Us San Diego Comic-Con exclusives are limited editions and are available on a first-come, first served basis.