Diamond Select Toys recently unveiled images and details for their upcoming “The Munsters” collectible figures. Done in their 7″ scale, the first set will include Herman, Lily and Grandpa.

Diamond Select Toys recently unveiled images and details for their upcoming “The Munsters” collectible figures. Done in their 7″ scale, the first set will include Herman, Lily and Grandpa. There will be two version available: one version at Toys R Us with their signature accessories (listed below), and a Select version at specialty stores that comes with a bonus accessory — a piece of the family electric chair!

Collect all three Select versions to build it! Look for both versions in October! 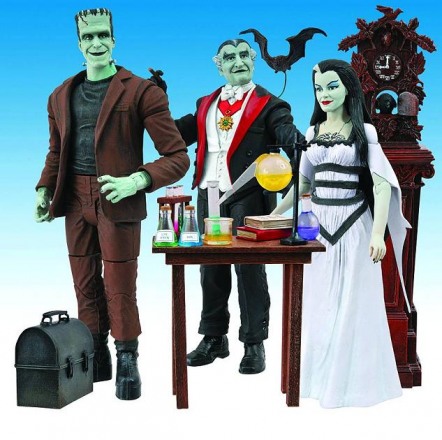 Herman Munster
Clocking in at 350 pounds and 7 feet 3 inches tall, Herman Munster was built in 1850 by Dr. Victor Frankenstein, but is nothing like Frankenstein’s monster of legend. A good-natured, soft-spoken funeral home employee, Herman is a World War II veteran, a good husband to his vampire wife Lilly and a loving father to his werewolf son Eddie. This 7-inch scale figure perfectly captures the likeness of actor Fred Gwynne, and also comes with Herman’s massive lunchbox.

Lily Munster
Born Lily Dracula of Transylvania, the matriarch of the Munster family is the daughter of a vampire, but werewolf blood also runs in her family, as both her brother and her son bear the curse. Loving dust and decay, she keeps the Munster household nice and messy, and is also an adoptive mother and confidante to her niece Marilyn. This 7-inch scale figure is a perfect likeness of Yvonne DeCarlo and comes with the Munsters’ raven-inhabited cuckoo/grandfather clock.

Grandpa Munster
Sam Dracula, the famous Count Dracula of legend, was married 166 times, and even though his wives are all dead, he still keeps in touch. Over 600 years old, he personally knew King Arthur and Jack the Ripper, and can still turn into a wolf or a bat, if he takes his pills. Played by Al Lewis, Sam is also a persistent inventor, having modified his own coffin into a race car, and this 7-inch scale figure comes with his laboratory table, as well as his pet bat Igor.