Diamond Select has released the first official pictures of their upcoming Marvel Select Captain America movie Red Skull collectible figure! The figure was first teased at NY ToyFair but has since been released over the weekend at C2E2. The Red Skull is based on the upcoming “Captain America: The First Avengers” which will hit theaters this summer!

The Marvel Select Red Skull will retail for $21.99 and feature several points of articulation. 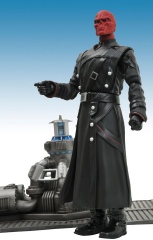