Disney’s Muppet Star Wars Action Figures are now available, and we’re here to tell you where you can get them without paying scalper prices!

Back in June we showed you some images of Disney’s new Muppet Star Wars two-pack action figures. The figures are based off the PVC Muppet Star Wars that were released about a year ago, but updated with articulation and more awesomeness. Today, we’re happy to report that these Disney Theme Park exclusives are now available. The two-packs include:

– Kermit the Frog as Luke Skywalker with Miss Piggy as Princess Leia
– Link Hogthrob as Han Solo and Fozzie the bear as Chewbacca
– Beaker as C3PO and Dr. Bunsen Honeydew as R2D2
– Sam Eagle as ObiWan Kenobi with Gonzo as Darth Vader with an accessory Camilla as a Stormtrooper.

For fans of both The Muppets and Star Wars, these Disney Muppet Star Wars figures are available only at the Disney theme parks but you do not have to actually enter the theme parks to get them. They can be bought outside at the marketplace. If you’re not anywhere near a Disney theme park, they can also be ordered online via Walt Disney World Merchandise Mail Order or by phone.

Don’t feed the scalpers on eBay! There are plenty to go around. 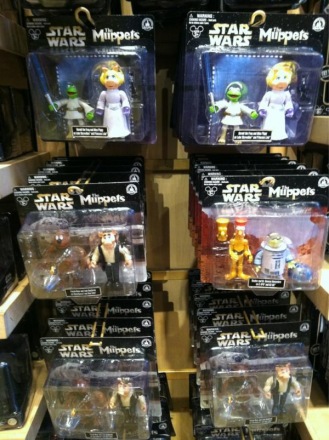