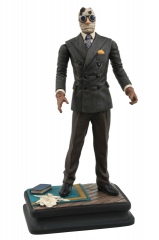 Diamond Select Toys has unveiled their new 7-inch Universal Monsters action figures that includes some more classic monsters such as the Invisible man and the Metaluna Mutant!

From the PR:
At comic shops and specialty stores, horror fans will be able to pick up a highly detailed Metaluna Mutant from 1955’s This Island Earth. With his bulging brain and claws, he conveys all the menace of the movie creature, and he even comes with the Interocitor, the device that allows humans to contact the Metalunans. Alongside the Metaluna Mutant will be the Phantom from Phantom of the Opera (1925), complete with his full-sized organ, which he plays in the catacombs of the opera house. Both will be available in oversized Select display packaging, with side panel art perfect for storing on a shelf.

Toys “R” Us will get their own exclusive figure in the Invisible Man, from the 1933 film of the same name. Jack Griffin is depicted with his goggles and false nose, and comes with a small display base. Toys “R” Us will also get a variation on the Phantom, one that wears a coat and mask, and comes with a violin and music stand instead of the organ. There will also be a more basic version of the Mutant at Toys “R” Us, minus the Interocitor. All of these figures will come in smaller blister-card packaging.