eFX Inc., announces that it will introduce new high-end collectibles based on the classic Star Trek films and TV series. 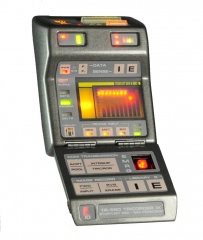 BURBANK, Calif. (Sept. 21, 2009) – Space was the final frontier for Capt. James T. Kirk and his crew – and now it is the next frontier for eFX Inc., which today announced that it will introduce new high-end collectibles based on the classic Star Trek films and TV series.

eFX will introduce its Star Trek collectibles, licensed from CBS Consumer Products, later this year with the Mark IX Tricorder as seen in Star Trek: First Contact – and it’s just the first of many contacts that eFX plans for fans to be able to make with the seminal science-fiction TV and movie series, which holds a special place in the hearts of eFX’s development team.

“For many of us, Star Trek was our introduction to the possibilities and promise of science-fiction storytelling, and it is an absolute honor to have been given the chance to bring Star Trek collectibles to fans,” said Bryan Ono, president of eFX Inc.

Pre-orders for the Mark IX Tricorder are expected to begin in September, and eFX will limit its production run to no more than 1,000 pieces worldwide. The Tricorders will be offered as a “Signature Edition” signed by actor Brent Spiner, who played Data in Star Trek: The Next Generation and the films it inspired.

Star Trek joins an incredible list of properties within the eFX portfolio. They include Star Wars; the original Battlestar Galactica TV series; Disney animation, live-action films and TV series; and the Muppets.

“With the addition of Star Trek to the eFX catalog, we’re very proud to be home to high-end collectibles based on some of the most classic entertainment properties and brands,” Ono said.

More details about eFX and its collectibles can be found online at www.efxcollectibles.com.