In true Star Trek spirit, ‘going where no man has gone before’; this collaboration is truly unique. 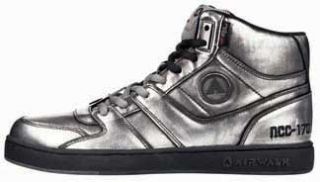 Now Trekkers can boldly walk in footwear like no one has ever seen before. CBS Consumer Products, a unit of CBS Entertainment, announced today that acclaimed street style designer jeffstaple, whose fashions have been sported by the likes of Mos Def, Questlove, Lupe Fiasco and John Mayer, has unveiled an exclusive Star Trek inspired high-top sneaker dubbed Terrain “Enterprise Edition.” The limited edition Airwalk sneaker will be exclusively available at jeffstaple’s retail shop Reed Space located in the trendy shopping district of SoHo in New York City. The shoes will be available for order through the retailer at 212-253-0588 for $80 per adult pair/$60 per kids pair.

“With the new movie we have been seeking out new and creative ways to make the Star Trek brand more accessible to a whole new generation of fans, and jeffstaple is intimately connected to that generation,” said Liz Kalodner, Executive Vice President and General Manager of CBS Consumer Products.

The shoe’s design channels the Starship Enterprise with its rough silver and gray distressed upper. The silver sneakers sport the iconic Enterprise badge as well as the famous craft’s ship number. Only 160 pairs have been constructed, 110 in men’s sizes 7 to 12 and 50 pairs in children’s sizes 1-6. Each pair will be numbered, designating them as an original in the limited edition.

“The opportunity to work with CBS and Star Trek on this was amazing. In true Star Trek spirit, ‘going where no man has gone before’; this collaboration is truly unique. Legendary skate brand Airwalk, a designer coming from street culture and Star Trek? This is definitely a first of its kind. And not the last!”
Jeff Ng, aka jeffstaple, is the founder and owner of Staple Design, Staple Clothing, and the Reed Space and has been sought after for his creative influence by the biggest names in fashion today. Beyond designing clothing, he is a graphic and web designer, artist, DJ, writer and entrepreneur.

About CBS Consumer Products:
CBS Consumer Products, a unit of CBS Entertainment, manages worldwide licensing and merchandising for a diverse slate of television brands and series from CBS, CBS Paramount Network Television and CBS Television Distribution, as well as from the company’s extensive library of titles. Additionally, the group oversees the CBS Retail Store and online sales of programming merchandise. For more information, visit www.CBS.com.