All four collectible figures feature multiple points of articulation and include a display base. 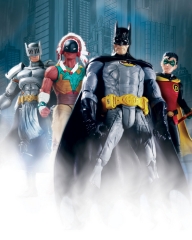 Is it possible that this is a spoiler of sorts? DC Direct has released official images of their upcoming Batman Incorporated collectible figures. These figures are based on the current ongoing series written by Grant Morrison with art by Yanick Paquette.

Bruce Wayne returns to Gotham City from his trip through time with a new mission: to recruit worthy heroes to don the mantle of the bat!

Realizing he can’t fight evil alone, Batman teams up with an array of heroes across the globe. Traveling the world, testing and training a strong team, Bruce Wayne builds a nearly unbeatable network of crimefighters.

All four figures feature multiple points of articulation and include a display base.