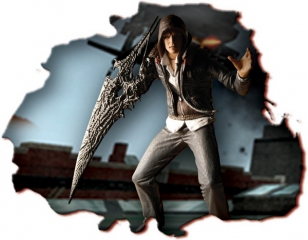 The scene is New York City and a mutating virus has just been unleashed in Penn Station (how would you know? — heyo!). Alex wakes up in the hospital, unable to remember anything, but soon learns he has the ability to modify his genetic code at will and attains superhuman powers.

With some help along the way, Alex begins to unravel the conspiracy surrounding the release of the virus and ultimately clashes with the likes of the military and secret government enforcers, all the while battling through the hordes of deformed New Yorkers using his newfound strength, agility and shape-shifting.

The fate of the city and ultimately the world beyond is up to you as the player, but however it turns out, NECA’s Alex Mercer features his morphing bladed right arm and ball-jointed neck, shoulders, torso, and wrists, and comes in a collector-grade clamshell package — ready for the fight of his life